I just watched a David Frost documentary about television satire in Britain and America. Frost is of course an alumni of the first British satire programme, That Was The Week That Was (TW3), which ran from 1962-3 in the UK and from 1964-5 in the US. In both cases it survived for just two seasons before a nervous establishment shut it down.

I’ve always thought good satire should go for the jugular, in a moment that’s shocking, funny, and true, all at the same time. That was certainly true of TW3 and the splendidly splenetic Spitting Image, which brought a Frankensteinian element to satire. After that it seems to have lost its bite in the UK, though Saturday Night Live is still going strong in the US.  Tina Fey is Sarah Palin, and more people probably formed an opinion about her based on Fey’s interpretation than from exposure to Palin. With the later addition of The Daily Show and Bill Maher, satire is in good shape in the US.

Here I’m not so sure. For example, would this song and dance routine from the final episode of TW3 in 1963 make it onto the screens today? It’s inspired by the murder of a white civil rights worker in Mississippee.

We’d be embarrassed both by what is coyly referred to as the N-word, and the black-faced minstrels, as much as the explicit lyrics. In fact, the BBC broadcast The Black and White Minstrel Show from 1958-1978. Here’s Part 1 of the last show.

Public figures were pilloried unmercifully in the 18th and early 19th centuries. The gentleman below, in this cartoon by James Gillray, is the Prince of W(h)ales. 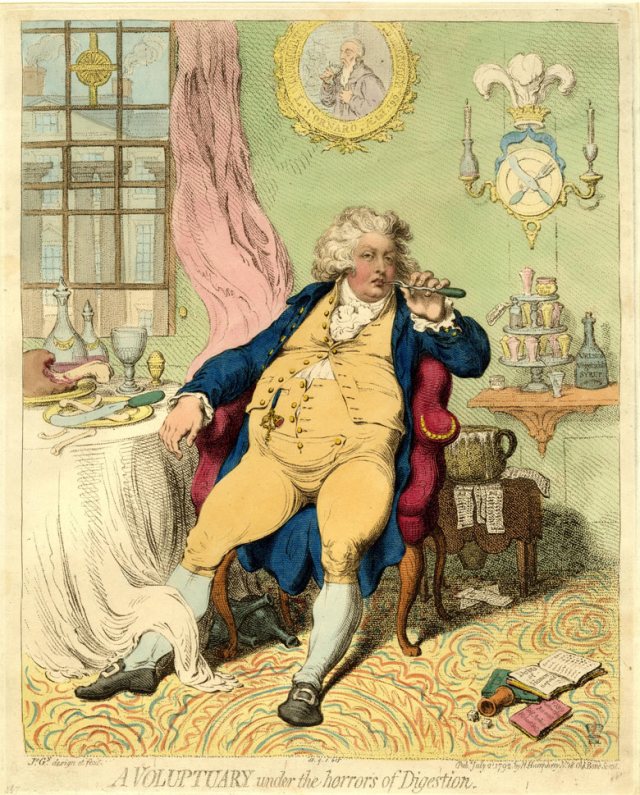 This tradition of robust satire temporarily found a home on television. Now it’s returned to its original home in political cartoons in newspapers. Steve Bell of the Guardian is the foremost exponent of going for the jugular. Rather than maunder on forever, I’ll finish this post with one of his favourite targets.