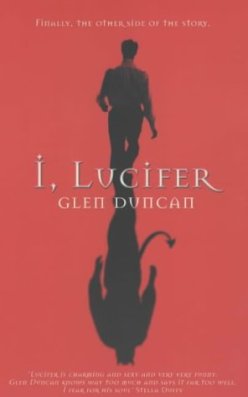 God: I’ll make you a deal, Lucifer. Incarnate as a human, lead a reasonably good life, and when you die I’ll take you back into Heaven.

Lucifer: You have got to be kidding! Without even a free trial to see if I like it?

God: Alright then, you get a month. Keep your nose clean, now…

So out pops the soul of Declan Gunn, alcoholic and failed writer, currently sitting in the bath with a freshly opened packet of razor blades, and enter Satan, Father of Lies. Ready to party.

This is the premise of I, Lucifer (2002), by Glen Duncan. (It’s an anagram of Declan Gunn, with the initials reversed). For Lucifer, denied the pleasure of the senses as a disembodied spirit, and suffering the agony of the damned as a fallen angel, it’s an acid trip with no come-down. He loves the world so much that each moment is a sensual delight. And he’s no longer in excruciating pain.

The downside is that Lucifer is stuck with Gunn’s less than average carcass, but makes the most of it, shoveling in all the food, drugs, alcohol and nicotine he can get his hands on, and becoming a frequent flier with the XXX-Quisite Escort Agency and other sexual partners.

He’s got a lot on his plate, has Lucifer, but takes time out from his busy schedule to write a film script about the Fall, which is snapped up by Hollywood. Johnny Depp is, of course, his choice to play Satan. The book you’re reading is a side project, a sort of journal where he explains himself, and how it all fell out between him and God, with particular venom directed towards Jesus (Jimenny Christmas).

There’s a lot to say, and it gets very complicated. Lucifer has also inherited Gunn’s memories, along with the experience of living as a human, which are beginning to play Hell with his own infernal psyche.

So, will Lucifer return to Heaven as a reformed character? I’m not telling you. I will say that I, Lucifer is a brilliantly sustained piece of ventriloquism, extremely funny, sometimes breathtakingly sad, and black as the dirt under your fingernails.

1 thought on “Book Review: I, Lucifer”